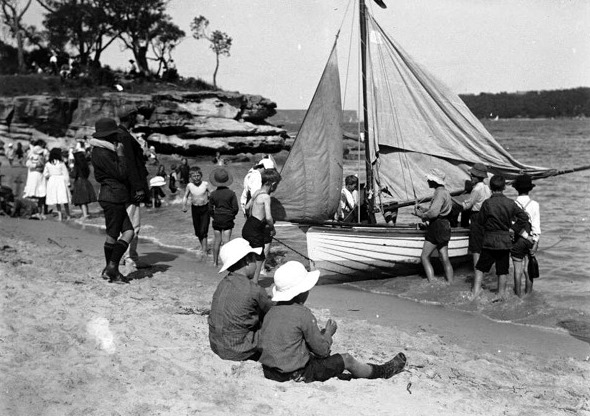 “The first sailing race that I can recollect as having taken part in was on Boxing Day 1878. The dinghy I sailed was about 15’ long, 4’6” in beam, 2’ deep, fitted with a fixed fin. Centreboards were only to be found in very few boats in those days. She was rigged with a sprit sail, bamboos being used for spars – partly for lightness, but principally because they grew in great numbers in Wally Bennett’s old home in Shell Cove.

Our victory was mainly due to the fact that most of the others in the race capsized. It was quite the usual thing to do if you could not win. It was a kind of excuse. I never did hold this view, and although I have been in many races since, I have never been in the ‘drink’. Perhaps I am lucky.” –Stanley Spain – Beginnings (1958)

(Stan Spain was a stalwart of the Sydney sailing community and won many championships in his 22-foot open boat Mischief. He was an active member of the Sydney Amateur Sailing Club for 64 continuous years – a club record. Spain died in 1967.)