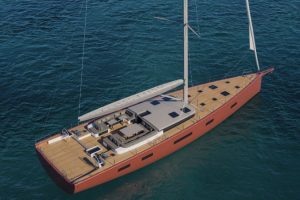 How many more of these very similar-looking things are going to be produced? I know, when the world goes into a recession/depression…

The German shipyard YYachts builds luxurious, fast and comfortable carbon fiber cruising sailboats between 20 and 35 meters. The success of the shipyard founded by Michael Schmidt began with the launch of the Y8 in 2015, an 80-foot sailboat called “Cool Breeze”.

6 years later, the yard developed a new design, modifying the 80-foot hull of the first model. For this new project for a Swiss client, the design and development team based in Palma de Mallorca collaborated with Surge Projects. The Mallorcan design studio headed by Javier Jaudenes stands out for its elegant, timeless and fast-paced designs. He has received several awards, notably for the Baltic 108. Read on.

From the archives: Businessman, boat club member sails past 90 –...