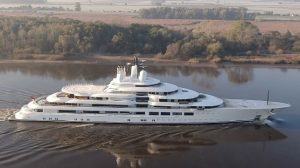 The government of Italy has seized the megayacht Scheherazade in connection with EU sanctions on Russia, bringing an end to months of speculation about the vessel’s fate.

Scheherazade has long been rumored to be the property of Russian President Vladimir Putin, though no definitive proof has been released. Her majority-Russian crew drew local attention in Marina di Carrara, where she is moored, and even more attention when they all left following the invasion of Ukraine. Researchers working for Russian politician Alexei Navalny claim to have obtained records that suggest that half of Scheherazade’s crew were employed by Putin’s personal security service, the FSO.

According to Italian media,  investigators believe that the beneficial owner is former Rosneft executive Eduard Khudainatov, an oil magnate and associate of Putin. Khudainatov is not explicitly named on any sanctions list.

Australia’s cruise ship ban is set to expire – but it...