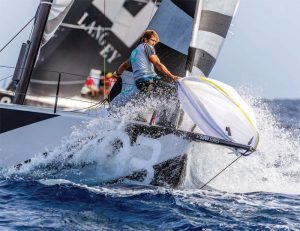 On the threshold of the 52 Super Series’s 10th year of competition, it is pleasing to see this season shaping up with so much promise. Things seem to change in a heartbeat in this world but it seems shore teams are now busy finessing the off-season optimizations in preparation for another demanding and close-fought season. New appendages are perhaps not as numerous as some originally mooted but the word in the yards is that two boats at least have gone for this option, although the future of one – Bronenosec – is not clear at the moment.

When you consider that the circuit’s first event in May 2012 saw just five boats on the dock in Barcelona, and only four raced the full series, it is especially gratifying for owners, key stakeholders and supporters to consider that we are going into 2022 with 10 boats expected at each of the five regattas. Of these six or seven will start the first race of the year with genuine hopes of winning a regatta and finishing on the championship podium in Barcelona at the end of the season. Even more remarkable perhaps, there really is no predicting who the 2022 champions will be. Read on.

A Summer of Twelves