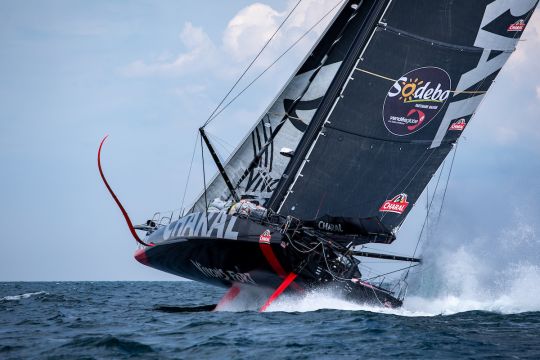 For those of us sitting smugly in our comfortable corners of the Anglosphere, it’s easy to ignore what’s happening elsewhere in the sport. Sailing has different priorities in other countries and cultures. Two major international single-handed events currently embody that contrast. They offer us fresh perspectives on how we approach competitive sailing.

Exhibit 1: The IMOCA (or ‘Open 60’) Class is the hottest ocean racing division in Europe, if not the world. (IMOCA = International Monohull Open Class Association.). They’ve just finished the Guyader Bermudes 1000 Race, the first event of their tough annual circuit.

All the familiar names we associate with this form of maritime masochism were there: Apivia, Charal, MACSF and Banque Populaire. Most notably, 17 of the 24 entrants – more than two-thirds – were French. Only two – Imagine (Conrad Colman) and Medallia (Pip Hare) – were from what, in the days before political correctness, we liked to call “English speaking” countries (New Zealand and Britain respectively).

The IMOCAs are extreme 60-foot machines sailed solo or with just two crew. It’s a uniquely demanding form of ocean racing. The boats are optimized in every way, from their outriggers, foils, and canting keels to super-sophisticated navigation and autohelm systems. In France, the IMOCA sailors are genuine sporting superstars.

Yet while most of us are familiar with the exploits of Spithill, Ainslie, Burling and Slingsby, who can name the last winner of the Route du Rhum or the Vendée? Our cultural biases are showing.

Exhibit II: 109 Finn sailors have registered to compete in the 2022 Finn Gold Cup to be sailed on Lake Garda in Italy over the next week. They will represent 19 nations in the ten-race series that, by tradition, is considered to be the world championships of the class. It’s a heartening affirmation of sporting internationalism.

The single-handed, cat-rigged centerboard Finn is one of the great enduring sailing classes. Designed in 1949 it was introduced at the 1952 Olympics and remained as an Olympic discipline until 2020. Bertrand, Coutts and Ainslie all began their international careers sailing a Finn dinghy but it has been a class largely dominated by Europeans.

The secret to its longevity is a tendency for the Finn community to – quite literally – sail their own boat. The international association has been flexible enough to embrace gradual changes to the class but also fiercely protective of their independence.

Balazs Hajdu from Hungary, who has retired after 17 years as president of the IFA, was replaced at the recent Annual General Meeting by an Australian, Rob McMillan.

Speaking before the Lake Garda regatta McMillan described the Gold Cup as “undoubtedly the greatest trophy in single-handed sailing in the world. It’s great to see us all together. We are the future of the Finn class, and I have to say it’s looking pretty good.”

Behind that quote is a typically Australian raising of the middle finger to World Sailing and the IOC for dumping the Finn from the 2024 Olympics in favor of a mixed two-person keelboat offshore race – an event that now won’t happen.

America’s Cup: Shifting to the deuce