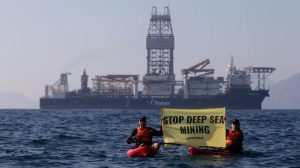 Greenpeace activists from Mexico and New Zealand renewed their protests over deep-sea mining again targeting the drill ship Hidden Gem, as it returned from its first test mission in the Pacific. The vessel has been the target of past previous environmentalists’ protests over the controversial practice of extracting precious minerals from the deep sea.

The Hidden Gem (61,000 dwt) is a converted drill ship, operated by Swiss company Allseas and commissioned by Canadian miner The Metals Company. While the vessel was undergoing its conversion in Rotterdam in preparation for the new role it was targeted, and again at the end of last week as it arrived off the coast of Manzanillo, México after eight weeks of test mining.

Activists from Greenpeace protested in kayaks holding banners that read “Stop Deep Sea Mining,” as the vessel reached Mexico. Greenpeace Aotearoa campaigner James Hita, onboard a small vessel off the Manzanillo coast, also delivered a message of protest to the captain of the Hidden Gem via radio. The protest was mostly symbolic to draw attention to their cause. Read on.